Commissioning a work of art carries a deep link with the creative process. The artist and the person who commissioned the work must nurture each other to achieve that idea that is suspended between them. In some way, commissioning a work implies being part of the work: being there.

As an artist, there is a fascinating challenge in commissioning a work: the need for a communion of perspectives so that the result is, at the same time, work and mirror.

Commissioned works have been throughout the history of art a way of fostering an enduring cultural treasure.

Throughout the history of art, great works have been created to order.

It was Pope Julius II who commissioned Michelangelo with the vault of the Sistine Chapel; Felipe IV of Spain asked Velázquez for a portrait of his daughter which led to Las Meninas; Rembrant’s incredible Night Watch was commissioned by the Amsterdam Harquebusiers Corporation; art collector and patron Peggy Guggenheim commissioned a still little-known Jackson Pollock mural for the lobby of his Manhattan apartment and he is going to take a complete turn and create the 1943 Mural. From this work, he leaves back the figuration to immerse himself fully in Abstract Expressionism and, a couple of years later, in the technique of dripping or dripping.

Being a patron, a collector and even a co-creator of art is not a minor title for culture. Rather, it was, and has always been, the very engine that makes artistic work possible in its time.

ORDER YOUR WORK OF ART

From Bogota we send artwork to any place in the world. 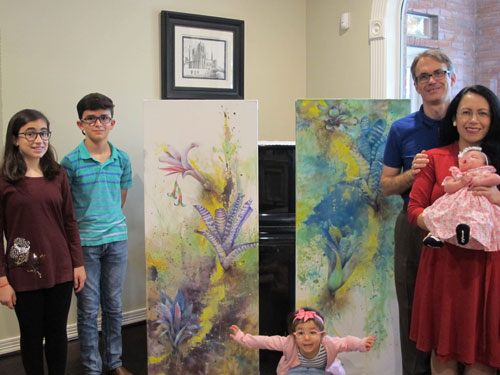 Beings, the beauty of nature and its diversity! I love Sergio’s art, his gift of transforming a person’s ideas of the images of the example of God’s creations into a reality on canvas. Also, he went beyond that and represented my family in these pieces of art. Timing could not have been better for this project, as it was during the addition of a new being into my family. Sergio was working his skilled hands with the Bromeliaceae with the colors that I had told him I like, while God was working with all the details of His masterpiece inside my womb of my fourth child. Every time, I would look at this diptych in our family’s room, I would remember these processes and see the excellent results of the beauty of these plants that Sergio did for us. Thank you Sergio! 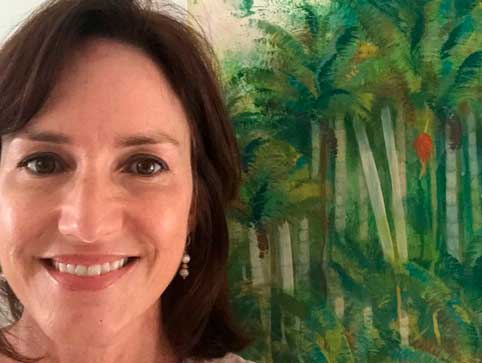 When I approached Ser about a painting on the theme of wax palms (C. quindiense), the national tree of Colombia, I asked only that the painting be explicitly botanical, with its principal colors true to the palms’, and that it reflect the palms not as isolated individuals – as they are commonly depicted – but in a spirit of exuberance, as part of a healthy forest. Ser engaged me in a fruitful dialogue about the spirit of the painting and its ultimate inspiration, the words of the explorer Alexander von Humboldt, to whom the palms appeared as “a forest above a forest” during his travels to Colombia in 1801. Ser’s beautiful composition imagines wax palms the way von Humboldt would have seen them, cascading endlessly down a mountainside through the humid cloud forest. I am so proud to own it.. 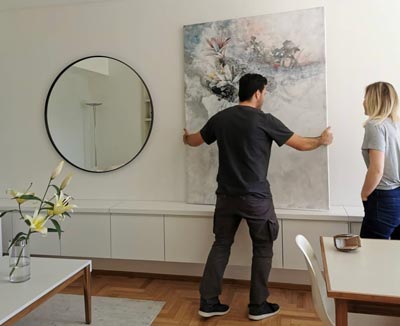 Only Ser can have the ability to understand one’s mind and soul and translate it into art.

With our talk about how I am, the things I like and my roots, he was able to make a unique and impressive painting that only reflects a smile on my face. Impossible to keep only one work of art from him, the second work I commissioned from him conveys to me as many beautiful feelings as the first one.

I can’t help but be amazed at his talent! 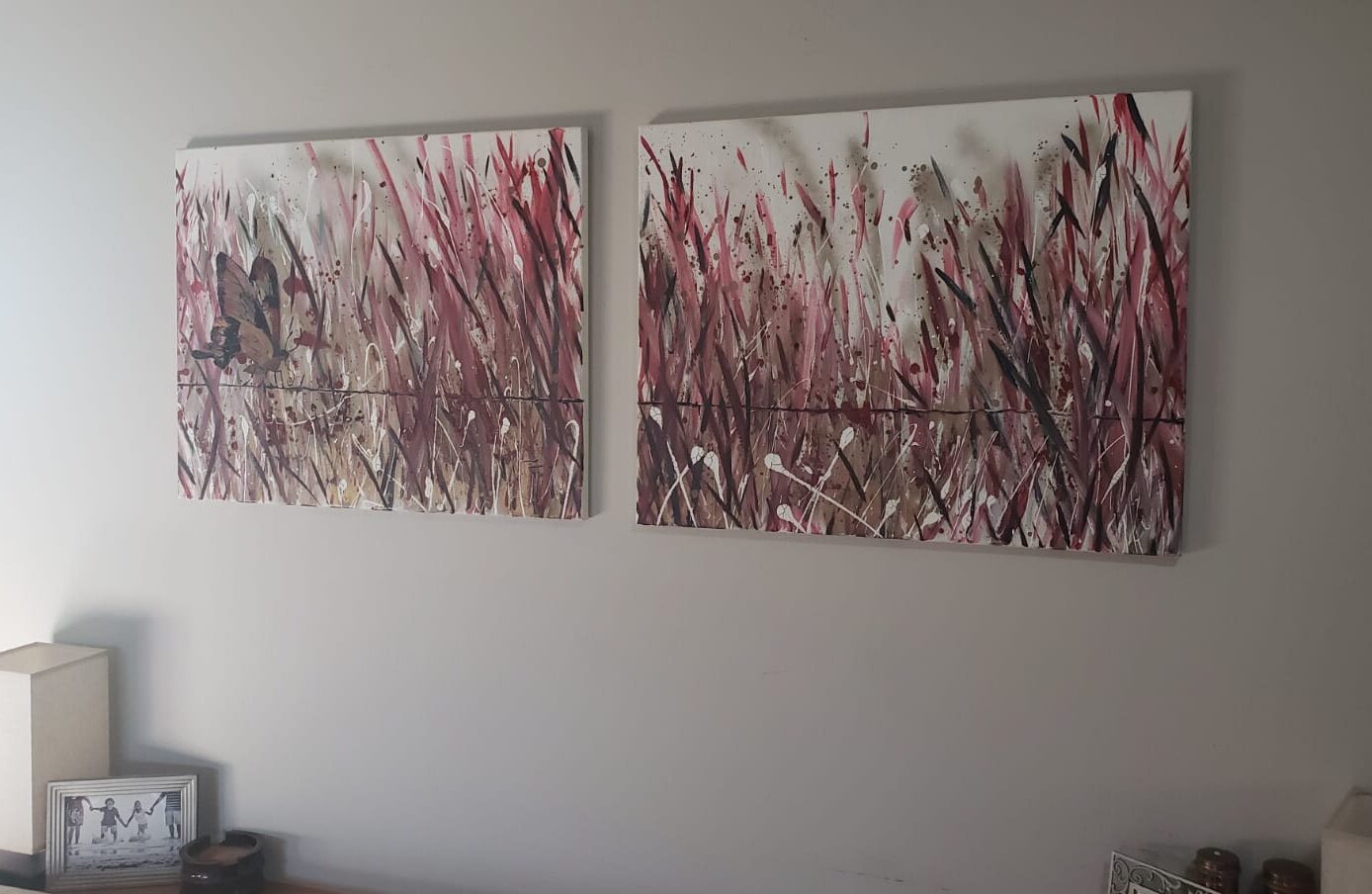 We are very happy with the painting and the memories that it invokes in all of us. We really didn’t have any specific ideas as to what we would like, we just wanted some art made by Ser. He asked us few questions, looked around the house, and figured out our style and what we would like. We could not have been happier. We not only like the art piece we love it. We receive so many complements on the oil painting anytime friends visit our house. The art Ser made for us is truly a show piece that quickly catches everyone’s eyes. We will definitely have another painting done by Ser. He is a true professional with deep love and tremendous sense for high quality art work. 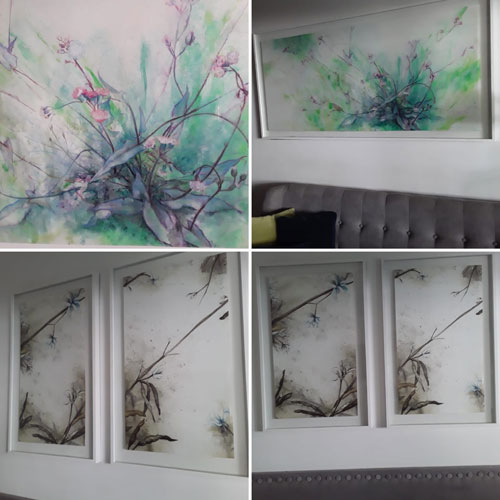 The perception of space and the interpretation of what is requested is in the head and hand of the artist and it is where the work of Being flows.  It is impossible not to be amazed at the result because it is exactly what one imagined. That was my experience with these beautiful works. Tranquility with openness, without losing color and originality, is what they transmit to me every time I observe them. Thank you, Ser!

My dreamed sea, my sea of ​​seven colors, the waters that brush my skin, the waves that drag my thoughts, the sky that protects and shelters me, the sun ☀️ that warms my soul. 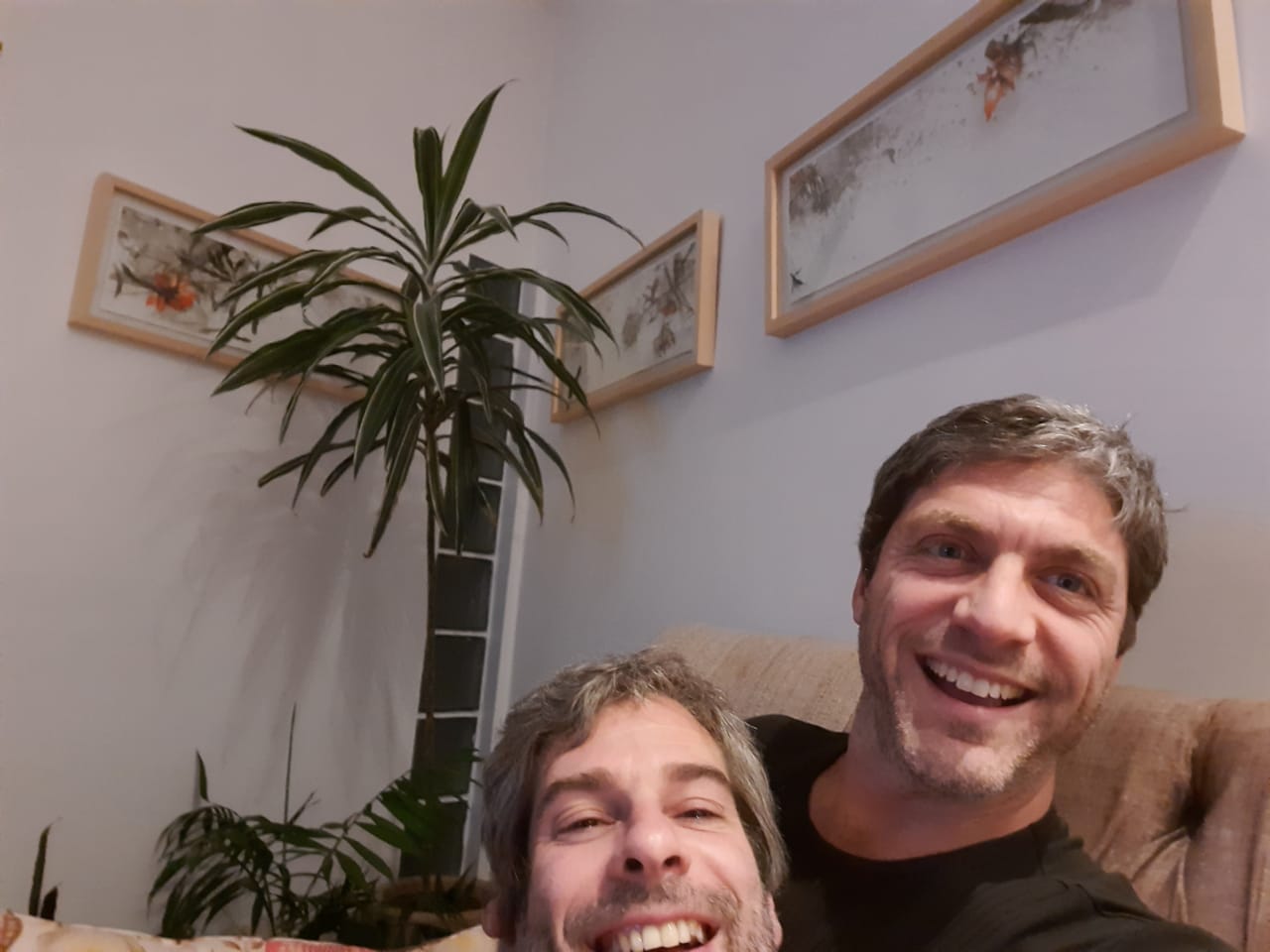 Nothing better than combining Argentine mates with thoughtful art !!!

Thanks to the great artist Ser Jiménez who left us his creative nature. We are happy with the warmth that his works transmit !! 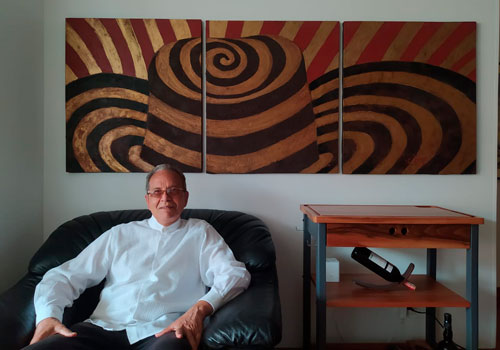 We are a family with coastal roots living in Bogotá. We wanted a work that would evoke the tradition and joy of that Colombian region and Ser Jiménez was able to capture that idea in this beautiful vueltiao hat. 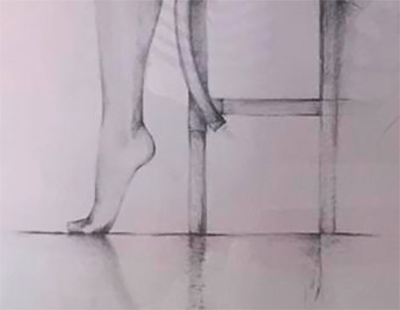 For me the painting is one of the most precious possessions, and you are someone special, not just a great artist, you are a unique human being, I am very happy to have you as a friend. 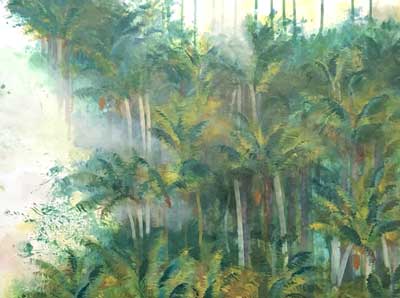 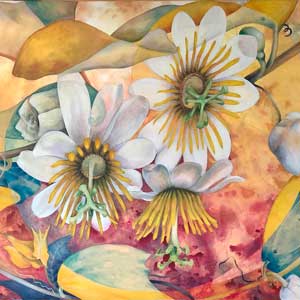 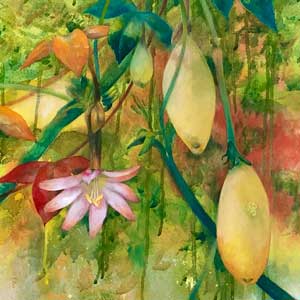 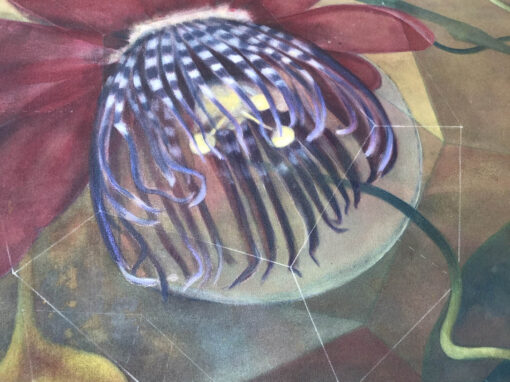 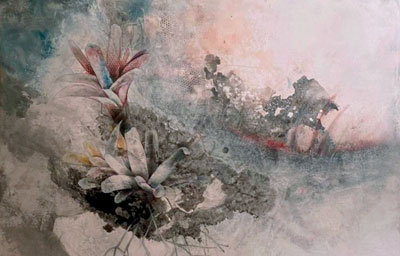 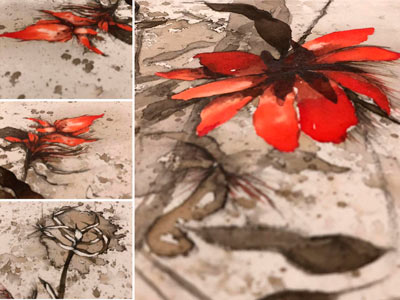 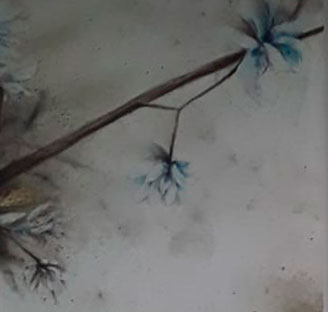 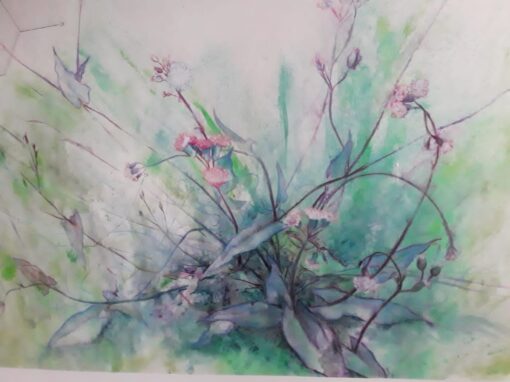 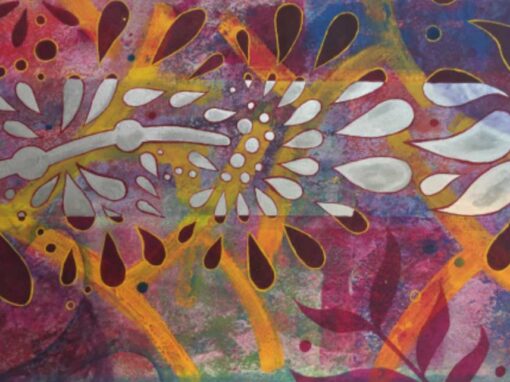 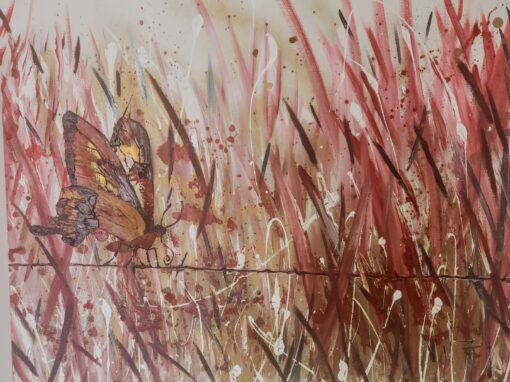 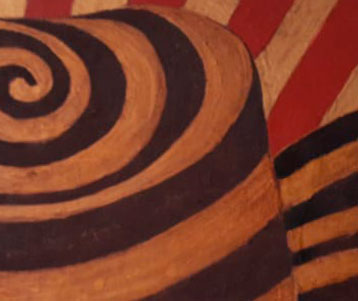 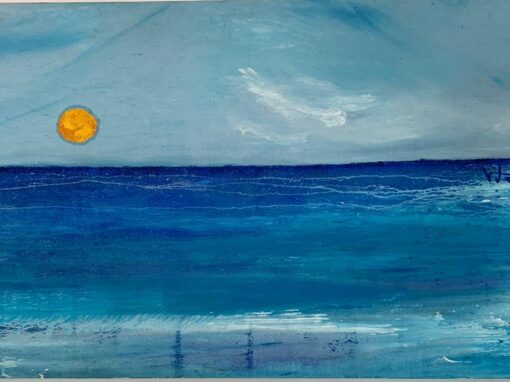